The Wakefield region is characterised by a diverse environment, economy and community. The region is part of the Yorke and Mid North Region of South Australia and boasts some of the most productive farming land in the state, with grain and hay production as well as commercial fishing and intensive animal husbandry (poultry and pig farming).

The region is recognised as an attractive residential location with a major commercial centre at Balaklava surrounded by the smaller townships of Owen, Hamley Bridge, Blyth, Brinkworth, Snowtown, Lochiel and the coastal town of Port Wakefield. Wakefield is also an important gateway to the Yorke Peninsula, a popular tourism destination which features stunning beaches, coastal settlements and excellent recreational opportunities including fishing, boating and camping.

The region hosts one of the state’s largest wind farms at Snowtown, together with the largest Australian inland road/rail intermodal facility at Bowmans. The Council area covers 3469km2 and has a population of about 7000 people.

Download our Ward Structure Map. Alternatively,  click here for the sa.gov.au Landservices Property Location Browser (PLB) . The PLB is a free map-based interactive application that can be used to view Local Government areas and ward boundaries. 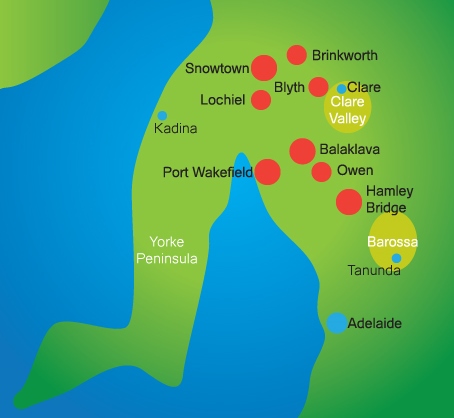