In response to the COVID-19 outbreak (Coronavirus) in Australia and across the globe, Wakefield Regional Council is taking proactive measures to stop the spread. Our front counter remains open but please call or email us in the first instance. We are trying to minimise risk to our people and our community so, if you can carry out business with us online or on phone, do so.

The names of Brightwood and Devil’s Garden generally relate to the same area, but what contrasts they seem to imply.

Their origins go back to the bullock drivers who carted copper ore along the Gulf Road from Burra to Port Wakefield – the most hazardous part of their long and tedious journey was over once they finally made it to the top of the sandhill signalling the end of the “Devil’s Garden.” From there to the coast the outlook was bright, so it became known as “Bright Outlook.”

This notorious stretch of sand dune country also brings into our history the “Corduroy Road.”

To overcome the problem of bullock drays (laden with copper ore) becoming bogged on the sand ridges (mud in winter and deep sand in summer), native pine trees were cut down and the logs laid side by side along the affected sections of the track (it was just a bullock track).  This meant that the drays could make their journey all year round, no matter what the weather.  If the bullock teams could not make it through this area (which included the Devil’s Garden) they would have had to find another route to the sea port, and Balaklava may never have developed.

No doubt there were several areas in the sandhill country where stretches of corduroy road were laid – we know of one that is preserved underground near the Devil’s Garden (on private property and not publicly accessible), but you can see a replica of the Corduroy Road at Urlwin Park Museum in Balaklava.

The Devil’s Garden area also has a reputation for serious flooding when the district is subjected to very heavy rain – probably the most notable event that began in 1889 which saw the area under water – this lasted  for nearly three years, “topped up” periodically by more rain! At the height of the flooding the Brightwood School was inundated, requiring a boat to be used to rescue the school’s contents through the windows.

Apparently one dance was held at the school after the flood, with all those attending reportedly travelling there and back by boat!  When the water levels had subsided somewhat, the school building was moved to higher ground on the north side of Devil’s Garden.

The train line from Balaklava to Hoyleton was also affected by the flooding as the railway line was laid within the Devil’s Garden area.  With the flooding, the water here was 6-7ft deep and spread out for at least two miles.

In more recent time (probably about 15 years ago) a Sunday afternoon thunderstorm sent a torrent of water across the paddocks and into the Devil’s Garden picnic area – the main road was cut by floodwaters and locals decided it was a good place for some boating escapades – until some unknown spoilsport stole the boat!

The monument at Devil’s Garden was unveiled in November 1964. Pictured below. 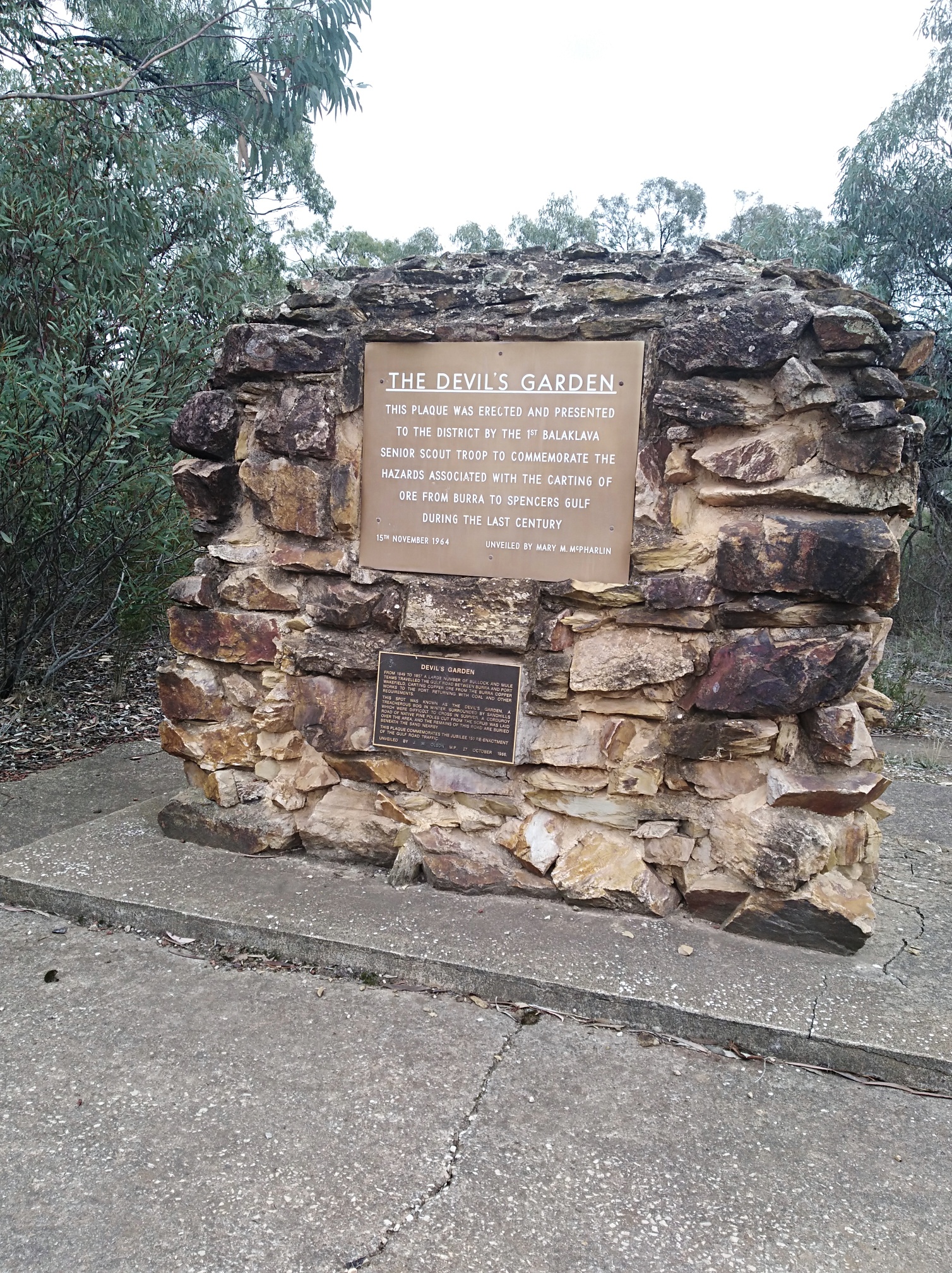