Like something from Poe, the twisted tale of Mr Fry is sure to make you jump in fright.

As you drive along the main road two kilometres south of Balaklava, you pass a patch of native scrub where there is a monument at the road edge.

Known as Fry’s Clump, long-time residents of the district probably know the significance of this site, while many newcomers have no doubt wondered about its history.

Notes prepared by the late Mr Bill Gregor for a 1974 history tour of The Rocks area, Fry’s Clump and Dalkey (Sichem) Cemetery state that the “first reference I have been able to find is in 1847 when an occupational lease was issued to Robert Fry [stockholder] of the Wakefield Plain". As land was first taken up in this area, Robert held a lease over 21 miles of land which bordered on the area we know today as The Rocks. He lived there with his wife Louisa Amelia.

On 10 January 1850, Robert and Louisa Fry were seen leaving home together in a gig. The next day her remains were found about four miles away and some six months later, his remains were found in the vicinity. Robert Fry allegedly killed his wife and disposed of her body in this area of scrub before taking his own life some time later.

Robert's body was found 28 June 1850 on an open plain near the River Wakefield. He was buried at Penwortham by relatives.

In later years when this area was surveyed, the area north of this scrub was named Fry’s Flat Reserve and the clump of trees was clearly marked on the survey maps, indicating where the tragic events took place. There are no grave markings but the scrub remains.

In 1890, the land was sold to Mr Ferdinand Wilhelm Waegner, a condition of sale being that the patch of scrub would never be cleared, and Fry's Clump is shown on very early Lands Department plans.

In 1988, a memorial was unveiled alongside Fry’s Clump, a silent reminder of a grim event in Balaklava’s pioneering history and an interesting example of local superstition (the actual burial site was never accurately marked) resulting in a now notable landscape feature.

Further information about Robert Fry can be found in Balaklava’s history book Change and Challenge (pages 3-6). 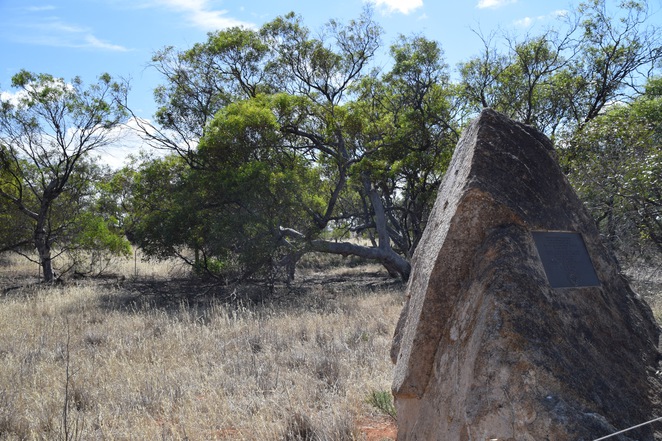